Tonight we decided to try something a little different for our chicken. Rather than roasting it, we wanted to grill it. We saw Bobby Flay grill a chicken the other night on one of the cooking shows and he had butterflied the whole chicken before grilling it. We found his recipe online for a Rosemary Bricked Grilled Chicken and the ingredients are very similar to the Roasted Chicken with Rosemary and Garlic so we combined the two to come up with our own hybrid recipe. For started, we axed the bricks, because we don’t have any laying around. 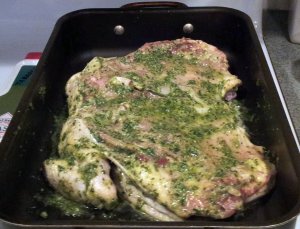 A look at the chicken while marinating

First, mix the olive oil, lemon juice, garlic, rosemary, salt and pepper in a food processor or whisk together in a bowl. We tasted it and it had a nice lemony flavor so we added a few leaves of some lemon basil (we just harvested some and need to use it). The mixture came out to resemble a rosemary-lemon pesto. We coated both sides of the chicken with the “pesto” and let it marinate in the refrigerator for about an hour and a half.

This is what the rosemary mixture looks like once it is ready.

After it has marinated for 1 to 2 hours, put the chicken on a medium grill, skin side down. Now, my grill runs very hot and it’s hard to get a temp lower than medium-high when it’s over the fire, so I put the chicken in the middle of the grill a five burner grill) and turned off the center three burners. I turned the outer left and right burners on high. The chicken took awhile too cook but it was worth it. In this indirect heat, it was about 30 minutes on the skin side down and 30 minutes on the breast side down. Periodically while it was cooking I would turn on the burners under the chicken to help it along and give it some char. For the last 30 minutes, I put in a thermometer and took out the chicken when it hit 160 degrees. Since it continues to cook after it is taken off the grill, I knew it would continue to cook for the 10 minute that we gave it to rest while covered.

A look at the finished chicken. Yes, I tore the skin while moving it but now you can see how juicy the meat turned out!