Sunday Gravy versus just a regular meat sauce? Maybe it’s a ragu? To be honest, I’m not a purist who knows the difference. I seem to have a hard time figuring out what each one is and I see contradictory information everywhere. Maybe it’s a regional dialect rather than different recipes/dishes. Regardless of what you call it, I do appreciate a meaty tomato sauce that is allowed to simmer for hours on the stove. Today we decided to make some pasta and a meat sauce for our Sunday dinner. I started looking online for some recipe inspiration and found a lot of recipes, but they were all mostly the same. To my surprise, the ones that claimed to be the most authentic were the ones that are the most similar to the sauce my dad used to make. When I was a kid, we simply called it “spaghetti,” which I always thought was the name of the dish, not just the name of the noodle. I guess he inherited it from his mother and it is the only food dish I remember him preparing. Everything else he “made” for dinner involved a telephone or a microwave. I do remember that my dad’s spaghetti came with a meat sauce, which I preferred over my uncle’s spaghetti that was served with meatballs. Apparently there was a minor rivalry between the two of them as to which version was best and authentic.

For those of you who don’t know, my dad was “mostly” Italian. His mom was born in the US a few years after her parents came over from Abruzzo. His dad was German and French but for various reasons, he never connected with that side of his family. In terms of what he considered his ethnicity, he always seems to think of himself as Italian-American, even though we did get stuck with a German last name.

For this sauce today, I used a blend of recipes that I found that reminded me the most of the sauce I knew as a kid. The first recipe I used as a base is from the blog “A table for two” titled “Great Grandma’s Pasta Sauce” and Julie gives a great narrative of how she came upon this recipe from her Italian husband. The other recipe comes from the book “Breaking Bread in L’Aquila” by Maria Filice. This is my go-to book for authentic Abruzzese recipes. I’ve mentioned her book before and I highly recommend it for traditional Italian cooking.

Heat a dutch over or large sauce pan over medium heat. Then, add the olive oil and heat it. Then, add the onion, garlic and carrot. Cook this mixture (a variation of a soffritto that we use all the time) for a couple minutes and then add the meat. Cook this until the meat is fully cooked and the onions are translucent. This will take about 10 minutes. 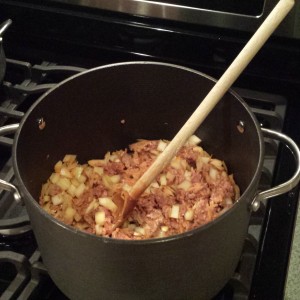 Now, add the tomatoes. Some recipes call for adding just the crushed tomatoes without the water from the can and then adding the tomato paste and using that can for water. Instead, we used the 2 cans of tomatoes (water and all) and then added the paste. This way we didn’t have to add extra water for the paste. Then add the basil, oregano and pepper flakes and stir in completely.

Allow this sauce to simmer for at least 2 hours on the stove, stirring occasionally. After an hour or so, the tomatoes will start to break down and you can crush them up. We let our sauce simmer for about three hours and then served it over some homemade spaghetti pasta. 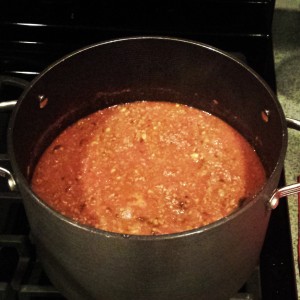 When we finished simmering this sauce, we served it over the homemade pasta and had a side salad. It was so good was jokingly called it “Red Gold”!

UPDATE: I just found recent posting on Soffritto from one of the people I follow on WordPress so I wanted to share a link to Barry’s published article “Soffritto: The Holy Trinity“