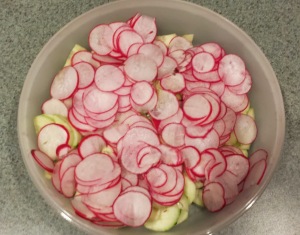 Somehow we ended up with a large bag of radishes in our fridge and I didn’t know what to do with them. Well, actually, the radishes were on sale and that’s how we ended up with them. As for what to do with them, I wanted something different that simply adding them to a salad. As a kid, it was a surprise every time I bit into a radish. In my mind, they looked like and should taste like peppermints so the earthy, spicy taste always took me by surprise. It wasn’t that I didn’t like them, I just had to take a couple bites to get over the initial shock.

This recipe came about from one I found online for pickled radish. When I started making it, we decided to add the cucumber and red onion. 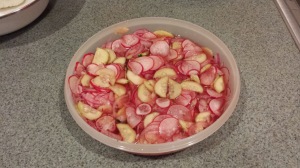 It’s real simple, mix the vinegar, sugar and salt in a medium sized bowl. Now, add the radishes, cucumber and red onion. Stir the mix well. Let this marinate for 30 minutes. You can store it in the refrigerator over night but the vegetables will get really mushy after 24 hours. When you’re done, save the seasoned vinegar for a salad dressing.

We had this as a salad on it’s own. However, you could easily mix it into a green salad if you wanted. Also, I think some shaved ginger would be good on this so I’ll add that next time.