This past weekend, we cooked a pork butt in the slow cooker. It’s a huge 8 lb piece of meat with nice marbling and a small layer of fat across the top. Our plan is to use it for pulled pork tamales that we’ll make later. We’ll also use some leftover Thanksgiving turkey in the tamales but that will be a different post, so check back later.

The pork butt is actually part of the upper front shoulder of the pig but calling it a butt is much more fun and entertaining. The word butt refers to the containers they used to use when transporting the pork. The meat is a tougher meat so everyone recommends cooking this low and slow. We used the slow-cooker on the low setting for 6 hours. When your time is up, you should shred the pork in the crock pot and let it cool down in its own juices. If it doesn’t easily shred with a fork, then cook it a little longer and then try again. We had to cook it about 2 hours longer than we expected, but it was worth it! The meat shredded with ease and tasted great.

We used a dry rub on our pork which is a variation of Alton Brown’s Ring of Fire Rub. I call it a variation because we make it in large quantities and end up using what’s available. Here is the original recipe from Alton.

For our pork, we covered all side liberally with the ring of fire mixture and put it in the slow cooker. We have been using the liners for the slow cooker because it makes it so much easier to clean. You can get them at the local grocery store. 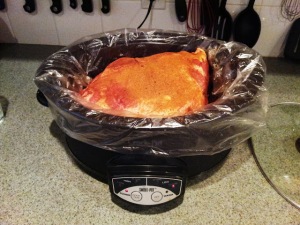 The great thing about the slow cooker is that you can basically set it and forget it, allowing us to put up Christmas decorations while the slow cooker did it’s work. One thing we added was a half can of beer just for a little something extra.

Once you’re pork is cooked, you have an unlimited amount of options on what you want to do with it. Like I mentioned earlier, we are using most of ours in pulled pork tamales. We’ll also make some pork tacos out of it. You can also make sandwiches, barbecue and any number of dishes. Have fun, experiment and enjoy!