Thanksgiving dinners and Christmas dinners deserve a grown-up dessert. That’s why we knew we had to try this recipe when we found it in the monthly newsletter that our realtors send to us. Of course, it wasn’t as fantastic as it could be so we modified it for some extra wow factor. The original recipe is for a Bacon-Maple-Walnut pie. The first thing we did was added the bourbon. We got this idea after watching a cooking show where bourbon was included in a couple different ways into desserts. The pie was great but we couldn’t help comparing it to a pecan pie, so we knew that was the next upgrade for this recipe. We are in Texas after all, so the pecan is always our nut of choice when it’s an option.

Since I mentioned them above and they’re the inspiration for this recipe, here’s the shout out to our realtors, Doug Jacobs & Jeff Mikeska, who sold us our house 18 years ago and still send us their newsletters and calendars. The newsletter they sent back in 2016 had this recipe in the holiday section. Of course, it caught our attention and we had to try it. I’ll also add that they’re great guys that we highly recommend them if you need a realtor in Austin. 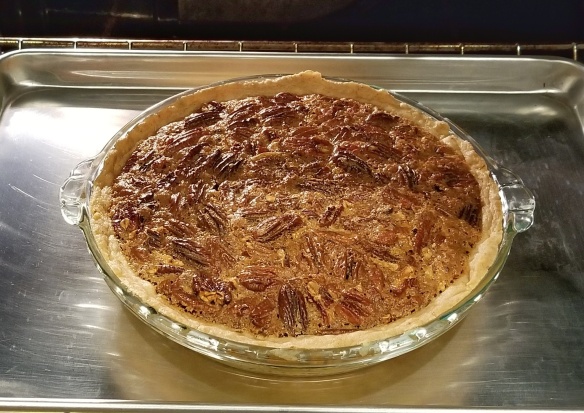 Ingredients for the Pie Crust

Ingredients for the Filling

Instructions for the Crust

NOTE: we usually don’t get as much bacon fat from the bacon used for this recipe as the original recipe calls for. Therefore, we usually use some bacon fat that we have left over from earlier. In case you’re wondering, yes, we have a little container like my Granny used to have where we collect bacon fat anytime we cook bacon. If you don’t have as much as the recipe calls for and you don’t have your own backup reserve, go ahead and substitute with additional shortening.

If you want an easy method to roll out your pie dough, check out this method using a recycled plastic bag: How to roll out pie dough using a plastic bag or wax paper
Instructions for the Filling

Bake pie at 350 degrees for 55 minutes, until puffy and brown. There should only be a slight jiggle in the center of the pie when it’s finished cooking. Let pie cool before slicing.

This twist on a classic pie comes from our realtor’s monthly magazine, American Lifestyle. We decided to add the bourbon to kick it up a notch. It’s the holiday season, so why not take it over the top! The bacon is really the cool element and it really adds an interesting flavor to this pie. In our recipe, we used a light maple syrup instead of the dark. I think the dark will be better but it did taste great. We also over chopped the walnuts and it probably would be better to have the larger pieces of a courser chop for some texture in the pie. 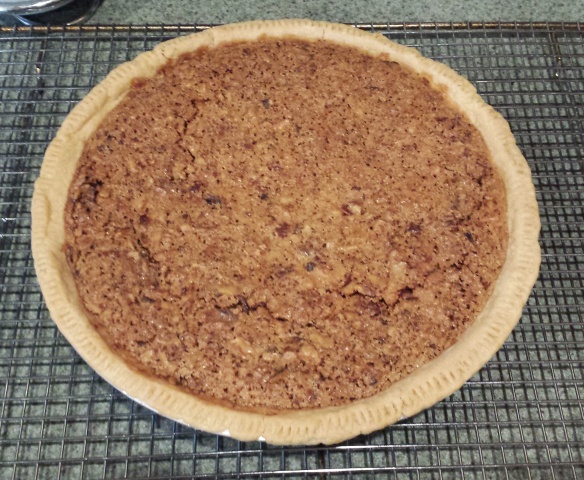 Preheat your over to 350 degrees.

First, make the crust. It’s a simple process similar to the patte brise, except you add BACON! Start by frying the bacon in a skillet on medium heat until they crisp. This should take about 3 to 4 minutes. Once crisp, transfer the cooked bacon slices to a paper towel. Now, save the bacon fat from the pan. Reserve 2 tablespoons of the bacon fat and then put the rest of the leftover bacon fat into a heat-safe measuring cup. Let it cool for 10 minutes and then add in enough shortening so the total volume is 6 tablespoons (1/4 cup plus 2 tablespoons).

Now that the bacon fat and shortening are ready, pour your flour into a bowl and add the fat from your measuring cup.  Cut this in with a pastry cutter or fork until it resembles coarse cornmeal.

Mix 2 tablespoons of cold water and the vinegar together and then add to the flour mixture until a soft, non-sticky dough forms. Form the dough into a ball, dust it with flour and roll into an 11 inch circle. Place a pie plate in the center and trim the edges.

Now that the pie dough is ready, start on your filling. Beat the eggs together with maple syrup, sugars and vanilla extract into a bowl with an electric mixer at medium speed. Mix in the reserved 2 tablespoons of bacon fat and the bourbon.

Crumble the bacon into small pieces in the bowl. Stir in the walnuts and then pour the filling into the pie crust.

Bake at 350 degrees for 55 minutes, until puffy and brown. There should only be a slight jiggle in the center. Let cool before slicing.